What is the truth behind the Mikey Story?

If you want to know if he really exploded when he drank soda and ate POP ROCKS®, the truth is that… he did not! In fact, the actor who played little Mikey lives today in a completely unexploded form in NY.

The rumour got started that POP ROCKS, because of the carbon dioxide in the product, would fizz up and when you drink it in conjunction with a can of soda they would explode in your stomach. The rumours became so bad that the FDA even set up a hot line in Seattle (WA) for people to call to dispel the rumour and assure parents that the candy was safe for children and that would not cause the stomach to explode if mixed with carbonated drinks.

What is POP ROCKS?

POP ROCKS are small pieces of hard candy that have been gasified with carbon dioxide under superatmospheric pressure. When these gasified sugar granules come in contact with moisture, in someone’s mouth or in water, milk, soft drinks, etc, the candy dissolves and the gas retained inside the carbon dioxide bubbles is released, causing characteristic crackling and fizzing sounds.

Which gas is used in POP ROCKS?

Carbon dioxide, the gas used in sodas worldwide. A pouch of POP ROCKS contains less carbonation than half a can of soda.

“Carbonated Candy” was originally invented in 1956 by William A. Mitchell, a chemist at the General Foods company looking for a way to make instant carbonated soda (think Coke) by somehow trapping carbon dioxide into candy tablets. But when the instant soda experiment didn’t turn out, the formula was forgotten and put away. Twenty years later, another chemist came across the formula, reworked it a little, and turned it into Pop Rocks.

Though Pop Rocks had been thoroughly tested and found innocuous, the exploding candy still startled residents when it was first released. The FDA arranged a telephone hotline to assure anxious parents that the popping candy would not cause children to choke. Mixing the candy with carbonated drinks would cause the stomach to explode, was the popular buzz.

General Foods was battling “exploded kid” rumours as early as 1979, a mere four years after the product went to market. They took out full-pages ads in 45 majors publications, wrote some 50,000 letters to school principals around the country, and sent the confection’s inventor on the road to explain to all that Pop Rocks generate less gas than half a can of soda and ingesting them could induce nothing worse in the human body than a hearty, non-life-threatening belch. Despite all these measures, the rumours of the urban legend abound even to this day.

But rumours die hard. Pop Rocks were briefly discontinued in the mid-1980’s.

Rising from the rumour-fanned flames just a few years later, today Pop Rocks continues to be a national brand full of energy.

How many flavours does POP ROCKS offer in Canada?

A large variety. Strawberry, Watermelon, Tropical, Wildberry and Gum are available year round. 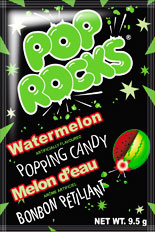